Parents want to see their kids succeed in whatever they do. One of the concerns about enrolling a child into sports is that it can feel like an overload of information, leaving parents with more questions than answers. The challenge then becomes figuring out what information is right and what is wrong. Being involved in youth sports is something that every child should be able to be a part of. Enjoying a healthy, active lifestyle is something they can carry with them for years to come.

To make sports fun and safe it’s important to understand what some of the myths may be. Let’s break them down.

MYTH: I DON'T HAVE ENOUGH TIME FOR HOCKEY TO TAKE OVER MY CALENDAR.

Any sort of extracurricular activity is going to add a time commitment and require some flexibility on the calendar. However, there are options that exist that require less time commitment that others. House league and Representative each have varying levels depending on the time that can be dedicated to hockey.

Practice and game schedules are released weeks or months in advance by associations and often have consistent time frames based on age groups. For example, an Atom team will often be on the ice earlier in the evening than a Midget team. This is just one of the ways that parents can stay ahead of the game when it comes to planning out who needs to be where and at what time.

The improvement doesn’t need to happen only on the ice – players can use tools like the OMHA Players Club presented by HockeyShot to improve their game at home.

MYTH: MY KID DIDN'T START SKATING UNTIL THEY WERE SIX. IT'S TOO LATE NOW.

No child is too old to start playing. Programs like The First Shift introduce new faces and smiles to the sport for kids from six to 10 years old. The aim is for no child to be left behind if they want to play hockey – programs like this are built based on skill and competition level.

There are no guarantees of future success for any player at an early age. The benefits of playing multiple sports at a young age outweigh the burnout or fatigue that can come from early specialization.

The Long Term Player Development model is a nine-stage model based on the physical, mental, emotional and cognitive development of children and adolescents. Each stage reflects a different point in developing the player with age-appropriate skills. The stages emphasize physical literacy, development and competitive excellence.

Registering in hockey is not just for the kids – it gives parents the chance to be a part of the experience as well. Being a part of a team isn’t limited to just the players as the parent group is important in helping to plan off-ice initiatives and activities. Volunteering as a Team Manager or helping to fundraise are all efforts that don’t go unnoticed. On a larger scale, associations will always value volunteers willing to dedicate their time in an administrative role. 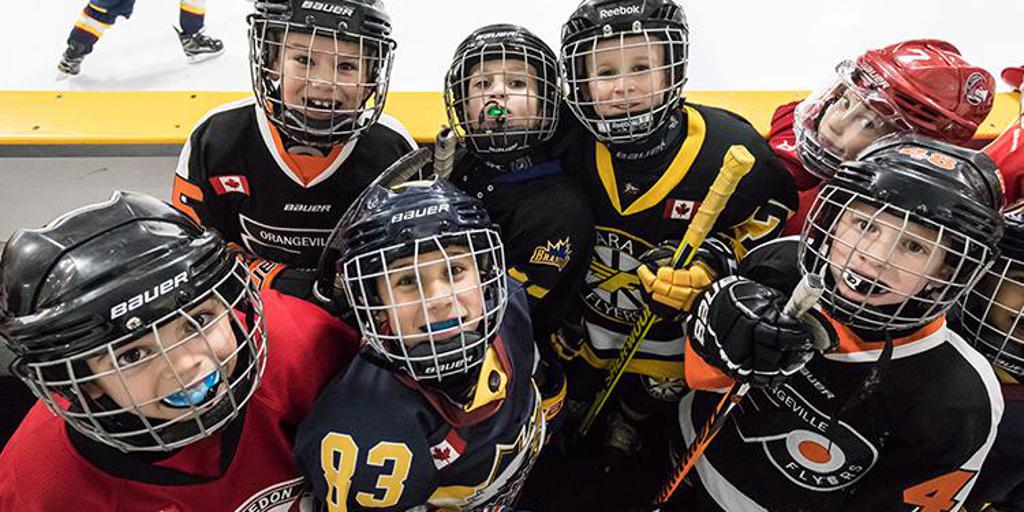 MYTH: THERE ARE TOO MANY COSTS TO PLAY HOCKEY.

The most expensive equipment on the market doesn’t always mean it is the most functional. Safety is always a top priority and there are ways to save some costs in the hockey budget without breaking the bank on the newest gear.

Coaches are required to take online courses and attend in-person clinics to become trained and certified to ensure they can create a positive learning environment for their players. Paying for extra ice or skill sessions shouldn’t be necessary. Those costs can either be saved or put towards other team activities.

After registration and equipment costs, how much you want to invest as a parent is up to you.

Players are required to wear full protective gear whenever they are on the ice with each piece of equipment specifically designed to keep those areas of the body safe. Injuries are an uncommon occurrence. Every team has a certified Trainer as a part of the bench staff. The OMHA has been a leader in player safety for years and the requirements of Rowan’s Law are just one of the steps to help educate all of those involved in hockey.

A minor hockey game isn’t a replica of what you would see on television. Bodychecking is a skill used to separate players from the puck and is progressively taught by trained and certified coaches. It is only allowed in Bantam and above (and only at the Representative level).

MYTH: MY KID WON'T LEARN ANYTHING UNLESS THEY WIN GAMES.

Hockey gives players the opportunity to learn new skills on the ice and grow as people off of it. Development is the focus, not the scoreboard. The game isn’t just about scoring goals – it’s about learning how dedication can help players master a new skill or why being a good teammate is an important quality to have throughout life. Skills like hand-eye and body coordination help players become better overall athletes and can be transferred to other sports.

Every level of hockey matters. From Novice house league to Midget AAA – the goal is to ensure that all participants are in a safe, inclusive environment where are continuing to learn. Kids would rather play a lot on a team that may be struggling instead of being stuck on the bench of a team that is winning. If players have a positive experience they can enjoy the game through adulthood, well after they have graduated from minor hockey.